(This is a guest post from members of the official Wikimedia chapter in Israel. You can read this the announcement in Hebrew here.)

Wikimedia Israel is happy to announce a great achievement this week. After a struggle of almost three years, the government of Israel announced its decision to allow the public to freely use images taken by government officials that were uploaded to government websites. 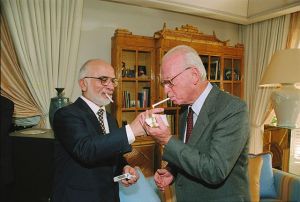 King Hussein of Jordan lights P.M. Yitzhak Rabin’s cigarette at royal residence in Akaba, one of the images released by the Israeli Government Press Office

Until today any use of such images was prohibited and required paying fees and obtaining permits from the relevant government entity. For the first time, the public is able to freely use images that were created using its own tax-money!

Wikipedia Israel played a major role in promoting the legislation process led by MK Meir Sheetrit. The amendment was proposed in 2010, and was promoted by Wikimedia Israel, with the support of the Israeli Internet Society, Creative Commons Israel and attorney Yehonatan Klinger.

Representatives of the Israeli Wikimedia chapter participated in numerous meetings and discussions in the Knesset—the parliament of Israel—and with government officials to educate them about free culture and free licenses.

In the last year, the chapter succeeded in convincing the Government Press Office and the Israeli Defense Forces spokesman to adopt its recommendations to free up thousands of images under a free license.

Wednesday, the government approved a decision drafted by the Ministry of Justice. This decision brings the Israeli law closer to the federal law in the United States, according to which images created by government agencies are free of copyright restrictions and open to public use.

Wikimedia Israel would still note that not all its recommendations were adopted. In particular, the government did not change certain images out of concern for potential libel that would affect the creator of the image. We think that a less restrictive phrasing would achieve the same goal, and would give the public more freedom to make optimal use of the images. Also, the government allowed the various agencies to restrict the commercial use of the images. We hope, however, that the agencies will conform to the idea behind the decision and will refrain from restricting the use of the images with the understanding of the modern media world and free culture.

This is a giant step for the chapter and Israeli law, which will allow us to progress toward our goal of giving equal opportunity to all people to access free knowledge.