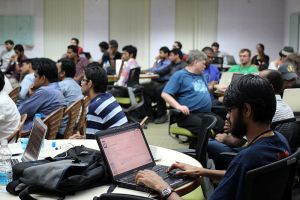 On November 9-11, the Wikimedia Foundation held a developer meetup in Bangalore, India

On November 9-11, the Wikimedia Foundation held a developer meetup in Bangalore, India. The gathering provided an opportunity for India-based developers to work with the Foundation’s engineering teams on several projects, such as JavaScript-based language engineering tools, and mobile applications with PhoneGap and LAMP technologies.

The DevCamp focused on Language Engineering, Mobile development and User interaction and experience design (UI/UX). It was attended by more than 85 developers, UX/UI designers, Wikimedians and translators. The work sessions focused on developing various Wikimedia mobile apps as well as language tools. The first day of the DevCamp kicked off on Friday with tutorials on Developing mobile applications with PhoneGap by Brion Vibber and How to internationalize your code by myself. Interactive Q&A after the sessions concluded the day with a lot of challenging and interesting questions after both tutorials.

The final day of the DevCamp started with stand-up updates from all participants, and ended with demos and presentations of 18 projects by 25 presenters. One of the most lovely updates was presented by Lakshmi, who learned to type in her language, Malayalam, using the typing tools that Wikimedia engineers have developed.

A screenshot of a mathematical formula rendered using the MathJax library, with a context menu in the Tamil language.

Accomplishments at the DevCamp include contributions to language engineering projects, where contributors added unit tests to jquery.ime (the input method library for multiple language scripts), submitted bug fixes, tested and actively reported bugs on jquery.ime and the Universal Language Selector. Another highlight was Brion Vibber’s integration of Universal Language Selector, WebFonts and support for language variants to the Wikipedia mobile app. One of the contributors, Ershad, built a Google Chrome extension based on the input method jquery.ime and won a Wikimedia shoulder bag for it. Other highlights include patches submitted to MathJax (a library used to render mathematical equations on HTML pages) by Aditya Ravi Shankar and myself to add internationalization support.

Usability testing of the new translation app at the DevCamp.


On the mobile platform, Swayam made enhancements to the Translate proofreading mobile app. Other mobile apps developed at the DevCamp include a Commons uploader and an app to track recent changes. Patches were also submitted to MobileFrontend, an iOS client library, and a first working version of the Wikipedia FirefoxOS app.

On the UI/UX design projects, participants worked on ideas for redesigning the translatewiki.net home page, the Mobile Universal language selector, Commons discovery and triaging apps. Here’s a complete list of demonstrations that were made at the Bangalore DevCamp; you are welcome to join the coding fun!

All in all the DevCamp maintained a high energy level throughout the three days, as well as produced a lot of new code, bug fixes, input keymaps, unit tests, mobile apps, translation UI and mobile designs, and positive collaboration across the board. 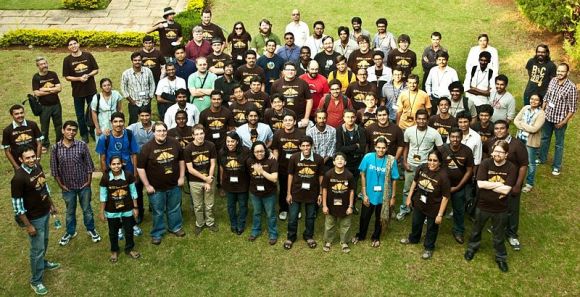 Group photo on the lawn of the IIM Bangalore.