Wikimedia Sverige–the Swedish chapter of the Wikimedia movement–had its fifth birthday recently, but we didn’t throw party to celebrate the important milestone. Instead of a celebration, the chapter was busy with two important activities related to its expansion. 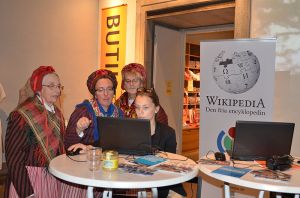 Staff member Sophie Österberg in a demonstration of Wikipedia for members of Sorunda ward association in traditional dresses on the day of the fifth anniversery of Wikimedia Sweden.

Members of the Human Relations Committee interviewed three candidates for the newly established part-time financial administrator position. Meanwhile, two staff members and three volunteers manned a table at the Swedish National Historical Museum in Stockholm for a two-day event organized by the Union of Swedish Local History, one of the target groups for Wikipedia Sverige. The purpose of the event was to recruit more editors within the community of mostly older amateur historians. In addition to the recruiting event, two lectures were given by Wikipedians on the partnership between Wikimedia Sweden and the Council of the Swedish Central Museums, and on the ongoing Wikipedia editing project regarding historic Swedish local government wards.

Wikimedia Sverige has a lot to celebrate as the chapter has been very busy growing over the past year. Back in May and August 2011, two policy and planning seminars were held to explore the possibility of an organizational leapfrog. This resulted in an ambitious request for funds from the Wikimedia Foundation in September 2011. Under the guidance of Sebastian Moleski of Wikimedia Deutschland and with the financing from the WMF, the chapter has seen impressive growth.

Both the Board and the chapter agreed to dramatically expand the activity level of the chapter in 2012. The chapter underwent a transformation from an earlier 100 percent volunteer organization working on a shoestring budget to a professionally run organization with paid employees. In addition, the first office was rented in a low-cost office hotel in Stockholm’s urban quarter, Södermalm, intended for volunteer organizations, and in one go we had both a post office box address and a physical one. The new office space enabled staff to meet regularly in the early stages of expansion and organize chapter goals. Furthermore, in February 2012 our first full-time employee was hired, and he took office as Secretary in March 2012.

From then on it has been a challenging journey for the members of the Board and the new staff. New officers have been hired, a number of major projects have been started, bookkeeping and control systems introduced, income taxes paid on time, membership of an Employers Association applied for, and insurance policies acquired. In addition, the Board underwent the cumbersome effort of transforming itself from a bunch of happy hands-on amateurs to a disciplined set of decision-makers with eyes set on policies, long-term plans, and control.

So far we have muddled through the changes. We are in the last stage of implementation of financial management routines in cooperation with our Chartered Accountants, which will give us prime status as a Swedish public fundraising outfit. And by beginning of November 2012, there will be five employees working in our office on the implementation of the final part of the Year 2012 Program Plan. 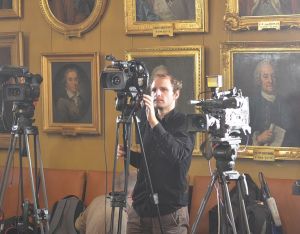 Newly aquired videoset for the “equipment pool” being used by Holger Motzkau at the Swedish Academy of Sciences, October, 2012

With change, new challenges are aplenty. The expansion has been so fast, that reorganization seems imminent. By January 2013, we hope to hire an Executive Manager to take responsibility for a well coordinated implementation of our ambitious second year plan in order to make available more time to develop further plans by the Board. Meanwhile, in the immediate future there will still be a lot of work to fine tune the administrative routines. New and better documents and policies have to be drafted regarding the Working Order of the Board, instructions for the Executive Manager, instructions on Financial Management, and other useful policies.

Needless to say, both the new staff members and the members of the Board have had to work hard to get the administrative infrastructure in place. With all this internal change, there has been some free time to spend on outbound activities. The most interesting achievement has been the start of a fruitful and hopefully long-term cooperation with a number of national Swedish museums. An agreement with the Council of the Central Museums was signed in May, and workshops and training seminars have been held in the last few months at the first group of five museums, with more in the planning phase. Another great achievement was the first two Swedish Wikipedians-in-residence officially started working at the Swedish Heritage Board in Visby and Stockholm.

Our eyes are set on continued expansion with an increase in activities and in budget for 2013, as well as growth of implementation teams, volunteers, and employed staff.

Bengt Oberger, Member of the Board of Wikimedia Sweden