This article is available in: English العربيةEspañol

Tyson Lee Holmes was with friends when he read about ‘Monmouthpedia, the World’s First Wikipedia Town.’ His first thought was, wouldn’t it be great if we could do it here, in Gibraltar? So, next day, he took the initiative. He contacted the Minister for Tourism, Neil Costa, and asked for permission to talk to the team behind Monmouthpedia.

Tyson’s initiative, in talking to Neil Costa, and instigating an approach on behalf of this British Overseas territory, greatly impressed the Monmouthpedia organisers, Roger Bamkin and John Cummings. They had already been inundated with offers from people looking for their city to be the world’s second Wikipedia town. Offers had come in from the Czech Republic, the USA, Norway and elsewhere. None had such strong political support behind them. 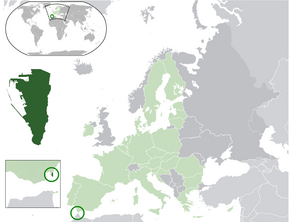 Gibraltar is the southerly most point in Europe

Within a few weeks, the Monmouthpedia team was in Gibraltar. They met Tyson and Gibraltar’s Director of Heritage, Clive Finlayson. Next, they met the Minister of Tourism, Neil Costa. In Tyson’s company, the team toured Gibraltar and experienced its rich cultural heritage first hand. To end the visit, they met with a large group of committed local Wikipedian volunteers and discussed how a project might be taken forward in Gibraltar. They felt that Tyson had all the key ingredients in place, so much so, that some preparatory work has already begun, with Tyson creating articles, and volunteer editors already showing interest in starting work.

Roger Bamkin, who co-created QRpedia and Monmouthpedia said: “As the GibraltarpediA project evolves, QRpedia codes for each new Gibraltar Wikipedia page will be created. The botanic gardens, the nature reserve, all the notable historical monuments across this culturally rich territory, will have specially designed plaques that link to Wikipedia.  Anyone with a smartphone scanning the QR code on these signs will see Wikipedia pages about these cultural treasures, in their own language if  available, sent directly to their phone.”

Monmouthpedia Project Leader John Cummings concluded: “Gibraltar is a truly multicultural place, squeezed on an isthmus between Europe and Africa. Because it is so close to both Morocco and Spain there are opportunities to reach out to cultures on both sides of the Strait of Gibraltar. Indeed, that is what we hope to do as the project unfold.”