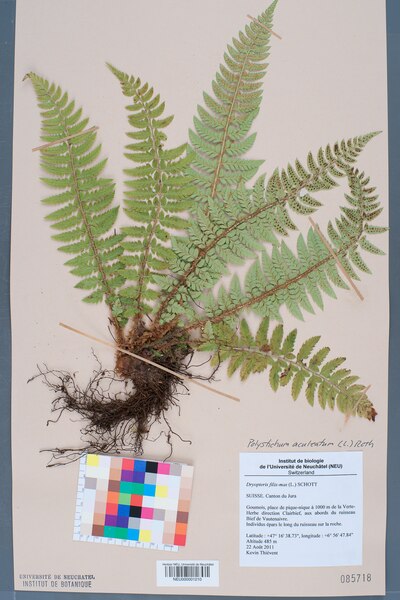 Polystichum aculeatum, one of the first plates digitized during the project.

Wikimedia CH and the University of Neuchâtel (Switzerland) have just started a project to digitize dried pressed specimens of Swiss plants from the herbaria of the University. Eventually, images and scientific descriptions of some 30,000 specimens will be uploaded to the online media library Wikimedia Commons, making them made available under a free license for usage by the scientific community and by the public. This agreement is the world’s first large scale dissemination of a digitized herbarium on a collaborative website, and the first large image donation to the Wikimedia movement coming from a University.

In autumn 2011, Wikimedia CH launched “Wiki Loves Universities“, a framework project for collaboration between the association and Swiss universities. Its aim is to create links between the academic world and the Wikimedia movement, be it through lecturers promoting Wikipedia, or through collaborations to release content. The digitization of the herbarium housed at the University of Neuchâtel forms part of this effort to disseminate knowledge available in Switzerland to as many people as possible. The initiative was taken by Charles Andrès, Chairman of Wikimedia CH and lecturer in biology at the University of Neuchâtel, in collaboration with the Institute of Biology, in particular Jason Grant, the person in charge of the herbaria. An experienced contributor to Wikimedia Commons, photographer Ludovic Péron, has been commissioned for the project and will photograph the plates between now and the end of 2012.

“This is a first for our University and for Wikimedia CH”, announced Nathalie Tissot, Vice-Rector at the University and co-signatory of the agreement. Whereas some collections from museums and other scientific or cultural institutions (GLAMs) have already gone through a similar process with Wikimedia, the digitization of a herbarium and its dissemination on a free collaborative website is also a world’s first. While guaranteeing professionalism in carrying out the project, this pioneering agreement offers the University of Neuchâtel an opportunity to preserve precious specimens on a long-term basis and also gives the institution superb online visibility, since every digitized specimen will indicate the origin of the document.

Piles of samples from the herbarium

The University of Neuchâtel is in fact the owner or custodian of a huge collection of herbarium specimens dating back to the 18th century and containing 475,000 plates of undeniable scientific and historical interest. Some bear the signature of Louis Agassiz, the famous 19th century Swiss-American botanist, zoologist and geologist. The agreement provides for digitization of the University’s “Swiss Herbarium”, consisting of plates produced by researchers and students over the years, or coming from gifts or legacies, such as collections belonging to the City of Neuchâtel that were entrusted to the University by the Natural History Museum in 1918. At the moment, the specimens in the Swiss herbarium are classified alphabetically, by family, genus and species. Digitization means that a virtual herbarium will be created and made available via the database of Neuchâtel’s Natural History Museum. It also means that the collection can be reorganised on the basis of different criteria (author, place, etc.) depending on requirements. “This initiative will also reduce the amount of handling to which these fragile plates are subjected, and will create a unique teaching tool,” commented Jason Grant, who also teaches botany at the University of Neuchâtel. “It will provide valuable help in documenting endangered species, in identifying invasive plants and in comparing flowering dates, which reflect the influence of climate change.”

“Several hundred files are ready to be disseminated on Wikimedia Commons, and as a result used on other Wikimedia sites, such as Wikipedia,” said a delighted Charles Andrès. “Because the funds to finance this project came from Swiss donors, we have decided to digitize the Swiss herbarium first, as a priority.” At the end of the first phase, Wikimedia CH will make the digitization equipment available to the University of Neuchâtel for one year, so that the work can be continued by qualified staff – botany research assistants and students, who will be given special training by the association. In exchange, the university will continue to place all the digitized images on Wikimedia Commons under a free licence, ensuring that a valuable heritage will be not only be safeguarded for future generations but also disseminated to a wide audience.

Read more about the project on Wikimedia Commons: