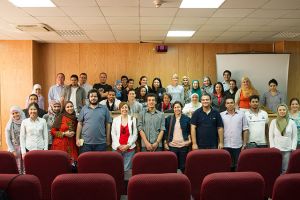 Group photo of Cairo end-of-term conference participants on the second day of the conference.

More than forty professors, Ambassadors, students, and supporters of the Cairo Pilot of the Wikipedia Education Program gathered at Ain Shams University in Egypt this week for an end-of-term conference wrapping up the first term of the pilot.

By all accounts, the first term of the Cairo Pilot was a success. Professors encouraged their students to edit Wikipedia in the program, with assistance from Campus Ambassadors at Ain Shams University and Cairo University and Online Ambassadors from around the world who helped students virtually. We started small; seven classes joined, with a handful of students participating in each class. For most students, the assignment was optional, either for no grade or for extra credit, which meant that fewer students actually edited Wikipedia than initially signed up, but the results are stunning even given this caveat. A total of 54 students created user accounts through the pilot, and those students edited an incredible 246 Arabic Wikipedia articles. All told, they added 1.1 million bytes of content to the article namespace on the Arabic Wikipedia, which translates to about 372 printed pages of content.

For the Wikimedia Foundation, the Cairo Pilot served as a showcase and learning experiment that will pave the way for future projects on the Arabic Wikipedia. As a pilot, the program served as a proof of concept for using Wikipedia as a teaching tool in universities in Egypt. We had no idea if students would be excited about the assignment, nor if professors would feel like it was worthwhile in meeting course goals. But over the Cairo Pilot, we learned that the Wikipedia Education Program was a good fit for Egyptian universities, and the enthusiasm displayed by students, professors, and Ambassadors significantly exceeded our expectations. 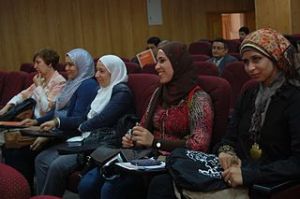 Participants had the opportunity to share learnings with each other.

Although the project only served as a feasibility study, the information students added already made a difference. Mina Saber, a student in Dr. Hoda Abaza’s French class at Ain Shams University, started the article on the 2012 French Presidential Election on the Arabic Wikipedia. Soon, an experienced Arabic Wikipedian stumbled across the article and added more content, collaborating with Mina to make the article even better. Within the 30 days of the election, the article received more than 2,000 visits, meaning Mina’s work had a direct impact on Arabic speaking people looking for information on the French presidential election. His contributions came as an extracurricular activity, but one he truly enjoyed.

“When we do it for marks, we don’t have as much enthusiasm as when we do it for ourselves,” Mina said. “I prefer Wikipedia articles because it benefits other people, not just me.”

Ain Shams Professor Dalia El-Toukhy organized a group of her postgraduate French translation students to translate articles from French to Arabic as an extracurricular activity. She’s looking forward to continuing the project in the future.

“This was the first time the effort in translation for class was useful to a large number of people,” she said. “It exposes the students’ work to real-life experience.”

Dr. Hany Hosseiny, a mathematics professor at Cairo University, agreed. He asked his students to write articles on the historical origins of math topics, including the evolution of the subject. He’d edited the Arabic Wikipedia in 2006 when he noticed some errors in the coverage of mathematics topics, but he’d fallen away from the habit until he heard about the Cairo Pilot, which he eagerly joined.

“I wanted to give my students the opportunity to see what we do not teach, the history of these topics,” he said. “Doing something like this for themselves is the best way to learn what we don’t teach outside the classroom.”

Students and professors were assisted by Wikipedia Ambassadors, who provided technical support and information about Wikipedia. And at the conference, many students reported they would like to serve as Campus Ambassadors next term, assisting more students as they learn to edit the Arabic Wikipedia.

“I feel that I am serving Egypt,” said Campus Ambassador Doaa Seif. “As an Arab, I would like to see us serving our countries. I’m looking forward to the day when we have an even larger Arabic Wikipedia.”