Respondents to the December 2011 Editor Survey reported that lack of time and poor interactions with other editors were the biggest obstacles in their way. Editors that primarily worked on more established Wikipedias (for instance English and German) also talked extensively about the abundance of rules and policies.

In an effort to better understand how we can make editing easier for Wikipedians, we asked them two questions in the survey, about the biggest obstacle that prevents them from making a contribution and about one thing they would like to see changed in order to contribute more effectively.

Word cloud of open ended responses to Q26: "What is the single biggest obstacle that you face in making an important contribution to Wikipedia?"

Many respondents spoke of unpleasant interactions with fellow editors, in many cases involving reverts to content they had added. One noted: “if an editor reverts with snotty comments or reverts a major contribution with no detailed explanation, I feel like saying ‘what’s the use?’  so far, I’ve come back after those experiences, but maybe someday I won’t“. Another respondent talked about the problems arising from a few editors assuming ownership of major articles: “… This makes just jumping in and doing significant rewrites feel almost like an act of aggression and one tends to hesitate to do so despite the ability to write well and knowledgeably about the subject.”

When asked what they would like changed, a large part of the respondents talked about a better editing interface: “Simpler editing interface, replacement of markup language with word processor-esque click and go interface – otherwise editing is too time consuming” (a goal the Foundation is pursuing with the development of the Visual Editor). Another noted: “Easier interface. Editing is difficult and if one is not careful, it’s easy to mess the article up.” Many respondents also mentioned that dealing with complicated expressions (for instance, mathematical equations) and language intricacies (for non-English Wikipedias) is difficult with the current interface. Some also felt that the Wikipedia community needed to do a better job of recognizing people by merit: “Merit should be given to the quality of edits contributed rather than vehement assertions…“, “People can cherry pick or misrepresent sources with impunity, as long as they are polite“. 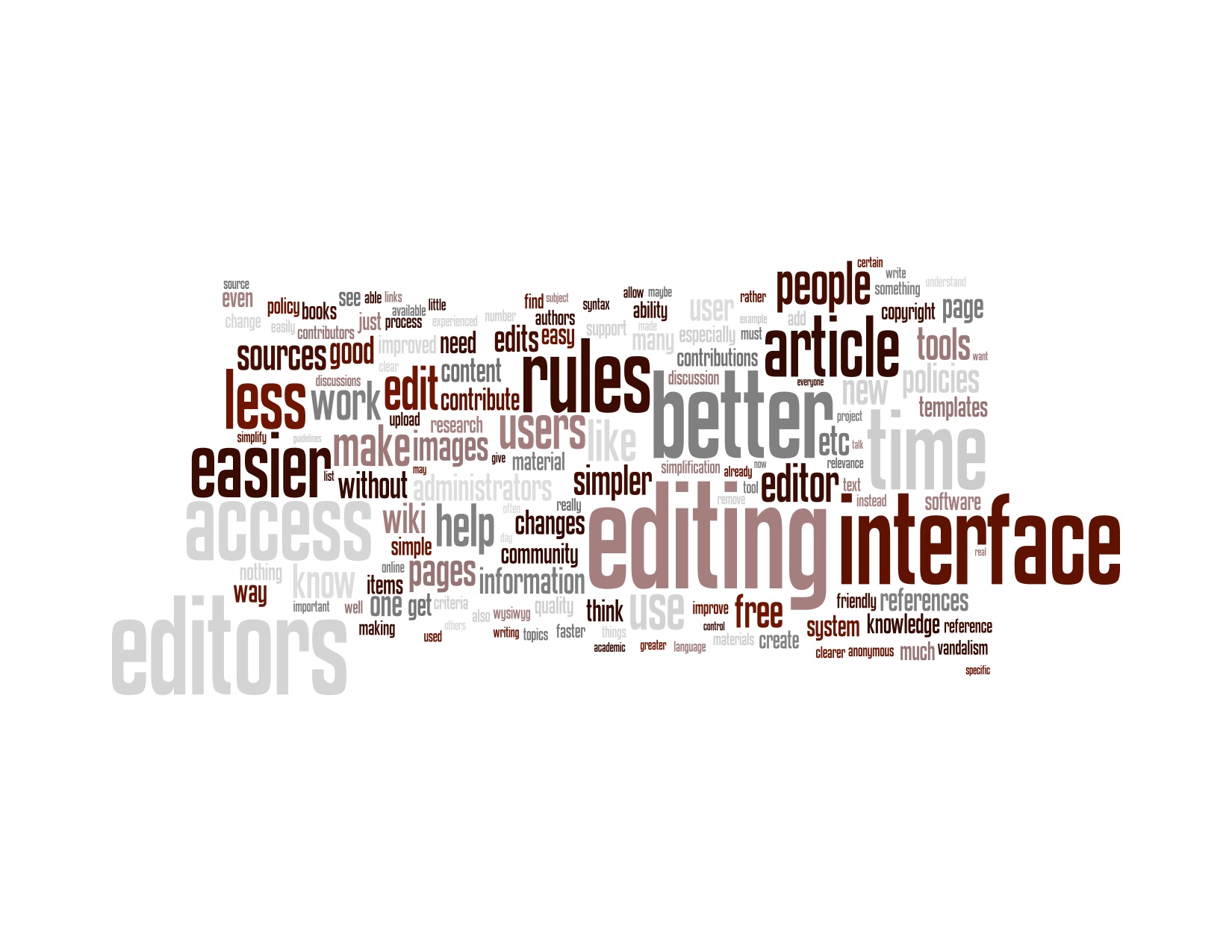 Word cloud of open ended responses to Q27: "What is the single biggest obstacle that you face in making an important contribution to Wikipedia?"

We plan to use these responses to inform the continuing improvement of Wikipedia.

In December 2011, we conducted an online survey of Wikipedia editors in 17 languages. This is the sixth and final in a series of blog posts summarizing our findings. If you are interested, you can find out more about the methodology of the survey here.