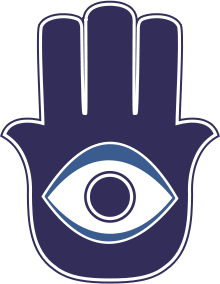 A hamsa, the identification symbol of the Visual Arts WikiProject. (From the interview: “Universally, visual art involves the eye and the hand, perception and creation. [The Hamsa] seems like a good iconic representation of these principles.”)

Who wrote the English Wikipedia’s articles about Vincent Van Gogh’s and Hieronymus Bosch’s paintings, or about sculpture, landscape art and abstract impressionism? There’s a good chance it was a member of WikiProject Visual Arts, a collaboration of editors who contribute to Wikipedia’s visual arts coverage. The current issue of the “Wikipedia Signpost,” the community’s weekly newsletter, has an interview with several Wikipedians involved in the WikiProject, which was started in 2005 and whose scope now encompasses nearly 16,000 articles. The interviewees include an art librarian, an artist and an art history student, but also several people who developed a deep interest in art besides their own professions. Here are some of the things they said about their work:

On motivations to contribute:

On the value of collaboration:

On the collaboration with cultural institutions (GLAMs):

On opportunities to get involved:

and check back early next week for the upcoming issue of the community newsletter.