Starting today, every Wikimedia wiki is revealing its interwiki map to the world, with the deployment of the Interwiki extension.

Interwiki links are links, generated by specific wiki markup, pointing to a website registered in advance. For example, from any MediaWiki-powered website, you can link to the Sunflower article on http://en.wikipedia.org by typing [[wikipedia:Sunflower]]; “wikipedia” is the so-called “interwiki prefix”.

Until now, the list of interwiki prefixes available on a Wikimedia wiki was only visible in manually maintained lists. The Interwiki extension changes that by offering a special page of the wiki, available to all, and listing all available prefixes and their target.

Interwiki links are often intermixed with “interlanguage links“, the small navigation links that show up in the sidebar of most Wikipedia skins, and connect a page with their counterpart in other languages. Indeed, the new Interwiki special page shows both interwiki and interlanguage prefixes. 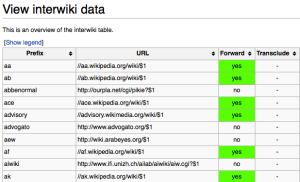 A screenshot of the page Special:Interwiki

The special page to display available interwiki links was developed by Tiffany May Stevens in November 2005, because she was annoyed at forgetting the interwiki prefixes. Two years later, I added it to our version control system. In January 2010, Reinhart Wiewe requested that the Interwiki extension be installed on all Wikimedia wikis.

Sometimes it takes a long time for something seemingly trivial to become available in your favorite wiki. Do know that volunteers, together with developers of the Wikimedia Foundation and other companies like Wikia, are working around the clock to improve each and every corner of the MediaWiki feature set.