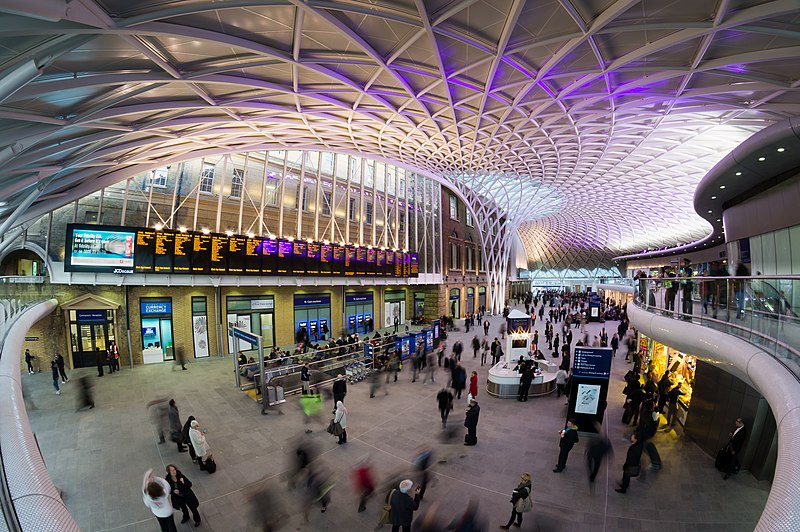 Today’s Wikimedia Commons Picture of the Day depicts King’s Cross, one of the largest train stations in London. Colin (User:Colin) visits King’s Cross every day, and when he saw that the new departures concourse had opened on Monday, 19 March 2012, he instantly knew he wanted to get a picture of it.

“[It] had been under construction for quite a while and was closed off, so you couldn’t really see what it would look like,” he said. “Then it opened, and I got a chance to stare at it on my way to work. It is an amazing building. I decided that I would come back with my camera.”

The next day, Colin brought his camera to the station as planned. At first, he tried shooting with his standard lens, but he “couldn’t capture the expanse and the architecture that just sweeps up in front of you and over your head,” so he switched over to his fisheye lens. “Normally such a lens isn’t a good choice for architecture as the straight lines are bent,” he explained. “This is OK for an arty picture, but would it have any educational value? Would it be any use for an encyclopaedia that will naturally be conservative about images? Fortunately, in this case, much of the scene contains bent lines already.”

The resulting image provides an amazing 180 degree view of the station. Colin purposely used a long, ½ second exposure “for the blurred effect it gives to the frantic commuters.” However, he points out, “you’ll note that all the commuters who are stationary are studying their mobile phones.” He feels that the choice of lens and exposure combine to convey the impression of a “vast and energetic scene.”

Colin considers himself a hobbyist photographer, and while he has been interested in taking photographs since he was a teenager, he only became serious about it when he purchased his first DSLR 18 months ago.

Colin first started contributing to Commons because he wanted to add photos to Wikipedia articles he was working on. He has been a Wikipedia contributor since August 2005, and he uploaded his first picture to Commons in November of that same year. He was working on an article about anticonvulsants, so he took a picture of a glass ampoule of paraldehyde using his compact camera.

After purchasing his DSLR, he became more involved on Commons. “I realised I could contribute high quality photographs rather than just adequate ones,” he said. “The requirement that the content needs an educational purpose is a limitation — no arty stuff — but also helps me come up with ideas for new pictures.”

Colin feels that his participation on Commons has been useful in helping him learn and improve as a photographer, both through his own contributions and through his involvement with the community. “Since I’ve started learning to take better pictures, I’ve gotten involved in some of the picture review processes. Looking at, and judging other peoples pictures, is a good way to learn what makes a good picture,” he said. “I’m really chuffed that I’m able to take pictures that people want to look at and enjoy. I plan to keep improving and submitting better pictures.”