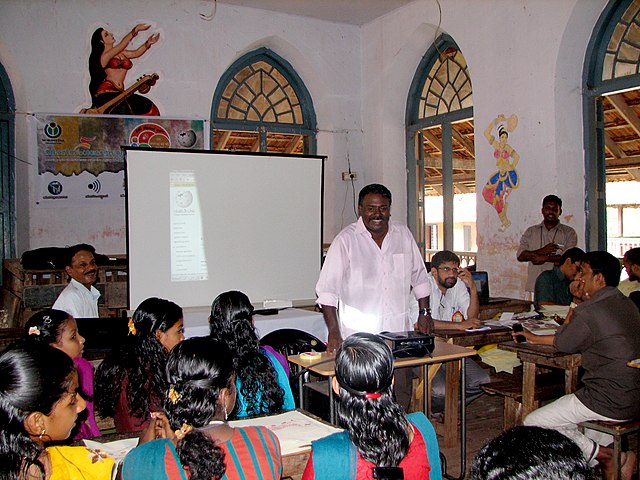 I made a short visit to India last week in order to attend the Malayalam community conference “Wikisangamotsavam 2012” in Kollam, Kerala. The trip was my sixth visit to India since I joined Wikimedia in 2010, and was particularly special because it highlighted the importance and the huge potential of our projects in Indic languages.

While many people around the world experience India as an English-speaking country, close to 90 percent of Indians do not speak English at all. This is easy to miss, since it is quite common for the rest of the world to interact with one of the 125-150 million or so Indians (twice the population of the United Kingdom) who do speak English.

India is home to several hundred languages, 11 of which are the primary language of more than 30 million people worldwide (the approximate population of my home country, Canada). For Wikimedia to realize its vision, we need to have projects that serve the 90 percent in India, or more than a billion people.

What was encouraging about my visit was that I saw that this isn’t some naive dream. We are really seeing some communities emerge and there is no reason why we can’t attract large communities of contributors to build high quality Wikipedias in many Indic languages…and we can get these in the hands of every Indian on their mobile phone (more soon on mobile partnerships in India).

The Malayalam community served as a real inspiration. Over the past 4 years, they have built a passionate community that has expanded their Wikipedia from 5,700 to 23,000 articles. The community is a diverse mix of teachers, university students, computer engineers, photographers, business people, doctors and others. They have been highly industrious in working through the myriad technical issues posed by the lack of Malayalam keyboards and the limited localization of software into the language. They developed an input tool that now allows users to enter information in various Indic languages on a latin script keyboard. They have built innovative partnerships with the Kerala government to introduce Wikipedia to students and to conduct Wikipedia Academies across the state. One middle school teacher even had his typing class contribute Malayalam epic poems to Wikisource, a useful way to get their typing practice done. They recently held a photography program called Malayalam loves Wikimedia, adding over 11,000 local images to Wikimedia Commons.

The Malayalam community is only at the end of the first verse of their epic poem. I challenged them to think about ways to grow their community. They have 80 active editors and are doing great work. Imagine if they were 1,500 editors like we have in the Polish community (a similar language by number of speakers): a community of that size would enable massive access to knowledge for any Malayalam speaker.

During the rest of my visit, I had the opportunity to hear about promising steps in Kannada, Gujarati, Assamese, Oriya, Telugu, Sanskrit and Hindi (we also recently blogged about the Tamil Wiki Media contest). Most of these projects are small at this time with fewer than 50 active contributors, some less than 10. What is promising is that there are a few passionate people ready to provide leadership, reach out in their communities and help build Wikimedia projects in their languages. It is also promising that groups are piloting different strategies in partnership with the India Program’s Indic initiative led by Shiju Alex. If we can have 5-10 small pilots operational at any given time, with frequent exchanges of the experiences gained in each, then we can quickly figure out effective strategies and spread them across the many Indic language projects and to other smaller projects around the world.

Imagine a world in which every single Indian with access to a computer or a mobile phone can freely access and contribute to the sum of all knowledge in their own language. Wouldn’t that be something special?

Barry Newstead is Chief Global Development Officer of the Wikimedia Foundation. He does not speak an Indic language, but is committed to supporting these projects.