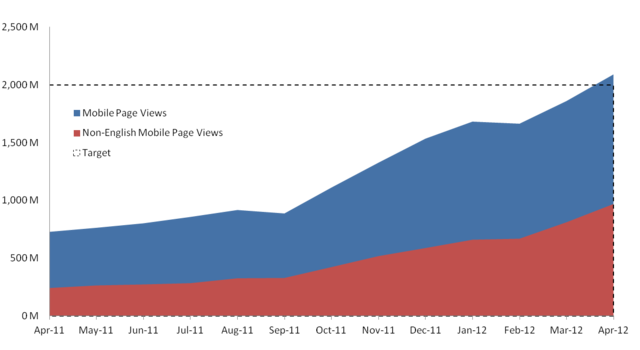 Page views to the Wikipedia mobile site (red: non-English versions) compared to the 2 billion target from the annual plan

One of the annual plan targets of the Wikimedia Foundation for 2011-2012 was to reach 2 billion monthly page views to the Wikipedia mobile site by June 2012. We’re happy to say that we hit the mark sooner, on the second-to-last day of April to be exact. April clocked in at 2.089 billion, a year-over-year increase of 187%. The mobile site now attracts 12.6% of all page views for Wikipedia, more than twice of its 5.1% share in April 2011.

How did it happen? As internet usage shifts from a desktop-centric environment to a more mobile-centric one, there’s a migration to smaller screens. Various industries and factors have made that happen, and several things have been done at the Wikimedia Foundation to move with the change. We can’t do justice to all the individual work by attempting to list it here, but amongst the many changes and contributions, a few highlights include the launch of the new mobile site last October, better device detection, and the official Android app announced in January.

Also notable about the 2 billion mark is the way use has evolved globally. A year ago, 67% of all visits to the Wikipedia mobile site were to the English Wikipedia; now that number is 54%. In the Global South in particular, traffic to the mobile sites for certain languages has grown tremendously. Some examples include Portuguese (from 3.9M to 27.4M), Arabic (from 1.7M to 10.2M), and Turkish (from 1.0M to 9.0M). As our partnership programs roll out to allow hundreds of millions to access Wikipedia on their mobile devices without incurring data charges, we expect mobile use to be even more globally distributed over the coming year.

The work on mobile, from both the tech and global development side, is not slowing down in the least however. There’s a lot more to come, but it’s worth taking a moment to recognize the mark we’ve reached, and to thank every community and staff member who played a part.