When University of Alberta-Augustana Psychology Professor Paula Marentette thought about Wikipedia, it was in the context of reminding her students not to cite it in a paper. But then she read Association for Psychological Science President Mahzarin Banaji’s call for psychology professionals to improve the quality of Wikipedia articles on their discipline. The arguments compelled Dr. Marentette to assign her students to edit Wikipedia as part of their coursework, and this term she joined the Wikipedia Education Program in Canada with her Language Acquisition class. The upper-level seminar class had seven students, and Dr. Marentette thought it would be good to have students work jointly to improve two course-related articles: vocabulary development and joint attention, with the goal of bringing them both up to Good Article status. 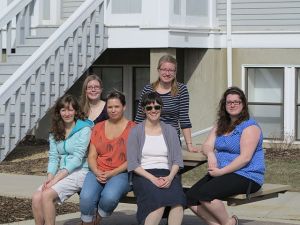 Some members of the Language Acquisition seminar at the Augustana Faculty of the University of Alberta.

The students in the class found this writing assignment a bit scary, but they were curious and eager to see how it could turn out.

“I was nervous about writing for Wikipedia because I didn’t know what to expect and the process seemed a little daunting,” said Alanna Lindsay, a fourth-year student from Wainwright, Alberta. “However, once we began, I quickly got used to Wikipedia and began to really enjoy the project.”

Alanna’s classmate Erika Heiberg, a fourth-year from Kingman, Alberta, agreed, saying she was “slightly intimidated” at the beginning.

“I was unfamiliar with the editing process and was overwhelmed at first by all the new interfaces and things like that, but I was excited to do something different,” said Heiberg.

Dr. Marentette said the traditional research essay generally develops information literacy, critical thinking, and writing skills, but she appreciated the fact that the Wikipedia assignment addressed those and more.

“The students learned a lot about evaluating sources. They learned how Wikipedia works (talk pages, standards etc.). They know now that they can figure out if an article is of reliable or not. It made the typical lesson about evaluating sources very relevant,” she said. “When writing, they need to constantly be aware of the potential audience. They have to address public response as soon as they begin to plan changes to an article. They have to defend their choices, or allow themselves to be persuaded to change their approach. They have to write and rewrite to achieve the tone and clarity and coverage for which they are aiming.”

And her students noticed their skills blossoming as they worked together to improve the two articles.

“The good thing about Wikipedia is that it teaches you to write in a more accessible manner and to leave out a lot of the unnecessary information that you include in a traditional paper to meet the page number requirement,” Heiberg said. “This project helped me to make my writing much more succinct and easy to follow.”

The students improved their articles, then reached out to their Online Ambassador, Neelix, members of WikiProject Psychology and other editors who contribute to psychology-related articles for feedback. When they felt ready, they submitted both articles to the Good Article review process, then collaborated to make edits based on the feedback of the reviewers. Students said they welcomed the productive feedback on their articles, and they were excited to have had their hard work recognized with the Good Article designation.

All of the students said they preferred Wikipedia assignments to traditional assignments after this experience. In fact, third-year student Lianne Theelen, a native of Red Deer, Alberta, said she hoped to take another class next year where she writes Wikipedia articles for class.

“We get more feedback on our writing and we’re more motivated to make it look good because it’s accessible to the public,” Theelen said. “My favorite part is not having it sit and collect dust or get thrown away after the term. Our article is still there, and it is useful for people.”

Other classmates agreed, echoing the themes that drove APS to call on professors like Dr. Marentette to use Wikipedia in their classrooms in the first place.

“In the future, I would prefer a Wikipedia assignment over a usual term paper, since this will help many Wikipedia users get credible information on psychology related topics,” said Juliet Brown, a fourth-year student born in Ghana and now living in Alberta.

“My favorite part about writing for Wikipedia was knowing that the information being presented is valuable to someone, and in particular to parents,” said Alison Owens, a third-year student from Olds, Alberta. “The joint attention page may be a place where parents of children with developmental disabilities go to look in order to learn more about their child’s disability. I think its great that we can provide that information for them in an easy access format, with reliable sources that they can trust.”