Contributing to the largest online encyclopedia is not as simple as it appears: it involves a gamut of activities from writing new articles to writing policies and guidelines to participating in the deletion process. But when participants in our survey of Wikipedia editors were asked how often they contributed to certain activities in the last one month, the top three activities they named most frequently as those to which they contribute very often/often are in the article namespace: fix formatting, spelling, grammar or make other minor edits (50 percent), add content to existing articles (48 percent) and write new articles (23 percent).

Being a Wikipedian is not only about adding content to Wikipedia. Many Wikipedians work behind the scenes to ensure content on Wikipedia is of high quality and meets the standards of Wikipedia. More than one-fifth of editors (21 percent) patrol for vandalism, copyright violations or other problems with articles often/very often. A slightly smaller number (17 percent) participates in the discussion namespace often/very often, and nine percent participate in the deletion process including speedy and proposed deletion often/very often. Other popular activities include: doing translation work and uploading or editing images, media etc. (14 percent each).

With 3.9 million articles in March 2012, the English Wikipedia is one of the more mature and complete language Wikipedias. It’s no surprise that editors who edit other language Wikipedias are more likely to say that they write new articles or add content to existing articles often/very often. Editors who work on smaller Wikipedias are also more likely to do translation work. Compared to the English (4 percent) and German Wikipedia (5 percent), more editors from the Russian (18 percent), Spanish (28 percent), French (16 percent), Portuguese (35 percent) and Arabic (36 percent) Wikipedias stated that they did translation work often/very often. 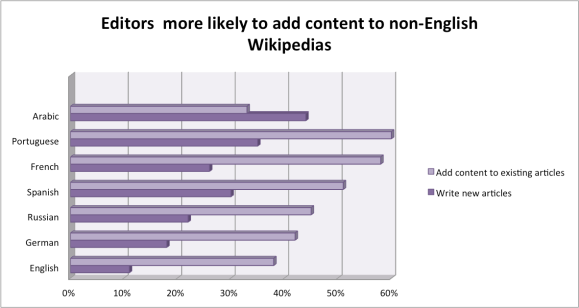 If you are interested in more information about Wikipedia editors like age or country of residence, please check out the long-awaited topline findings from the survey.

In December 2011, we conducted an online survey of Wikipedia editors in 17 languages. This is the second in a series of blog posts summarizing our findings. If you are interested, you can find out more about the methodology of the survey here.