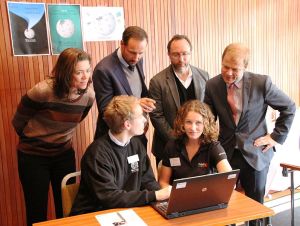 On Monday, at the annual Wikipedia Academy in Oslo, Norway, Crown Prince Haakon of Norway joined with Wikimedians to promote free knowledge and to highlight the cultural institutions and businesses that have embraced Wikipedia. They focused on the Wikipedia Zero agreement between the Wikimedia Foundation and Telenor, which enables more than 135 million customers in Asia to access Wikipedia without any additional charge on their data plans.

The celebration was headed by local Wikipedians, who introduced Crown Prince Haakon, Jimmy Wales, Minister of Development Heikki Holmas, and Telenor Executive Vice President Kristin Skogen Lund. Lund opened the celebration by advocating for Wikipedia and its open source format, identifying it as the “main pillar” of Telenor’s policy of openness in Asia.

“It’s an important development we put on track together with the Wikimedia Foundation and the Wikipedia movement, and we are proud to contribute to this,” said Lund

Lund then demonstrated Telenor’s commitment to the free knowledge mission by announcing that Telenor had contributed 200 photos to Wikimedia Commons with Creative Commons licensing. “There is so much work to be done globally, but we can also contribute at home,” she said. “We hope that others will do the same.”

The academy broke past participation records by attracting 99 sign-ups and 23 high school assistants, as well as the first ever royal participant. Half of the attendees belonged to GLAM institutions, mainly museums and archives. It marked the beginning of the sector’s national policy of officially acclaiming Wikipedia as a preferred channel of communicating cultural heritage. 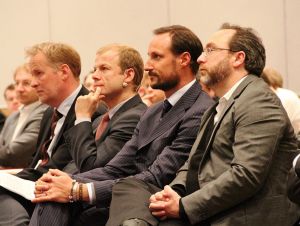 The 100 chairs of the academy room were all filled up, with people standing along the walls during the award ceremony for Wiki Loves Monuments 2011 and the local Wikipedian of the Year. The latter prize went to meteorologist Frode Korneliussen and the Catholic parish priest Claes Tande, who has 180,000 edits and more than 13,000 new articles.

During a course on how to edit Wikipedia, we learned that Minister Holmaas is an active Wikipedia user, and editor. Ten Wikipedia editors from the local Drömtorp High School were recruited to help teach the course. The students, with assistance from Wales, taught Crown Prince Haakon, Lund and Holmaas how to patrol, supervise RSS feeds, and recognize vandalism. The Crown Prince followed the lectures intensely and expressed admiration for the elaborate tools that administrators and patrollers use on Wikipedia.

This year’s academy coincided with the last day of the trial of Utøya terrorist Anders Behring Breivik in Oslo City court house, only a kilometer away. In the local media’s coverage of the academy, they focused on the efforts of the Norwegian Wikipedia community to keep extremists from making their imprint on articles. Jimmy Wales explained the Wikipedia model as one of openness and democratic debate, which helps the project attain a neutral point of view.

The morning after, Wikimedia Norway vice chairman Erlend Bjørtvedt appeared on the morning news, explaining how a corps of 150 norwegian patrollers and administrators on four continents, have managed to uphold the neutrality of disputed articles by a mix of patrolling, reverting and limited article blocking.