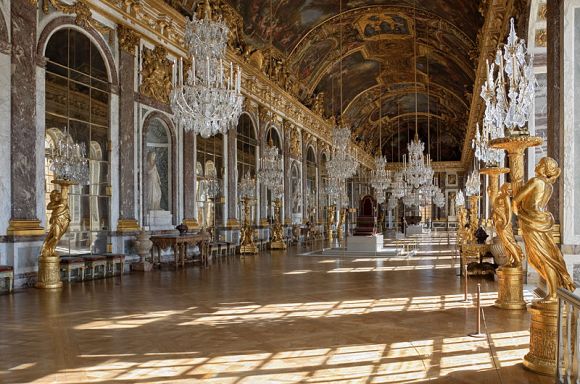 An empty Hall of Mirrors in the Château de Versailles. Photo by Commons user:Myrabella, CC-BY-SA

If you wanted to recreate today’s Wikimedia Commons Picture of the Day, taken by user:Myrabella, it would not be easy. The ornate hall depicted in the image is the Hall of Mirrors in the Palace of Versailles. It is one of the most famous rooms in the world, and an immensely popular tourist destination, drawing more than 3 million visitors per year. And yet, Myrabella managed to capture the full length of the hall, completely unobstructed by crowds of tourists.

“It is somewhat rare to have this opportunity,” she said.

She was able to get this shot thanks to a partnership between Wikimédia France and the Château de Versailles, which allowed five photographers to document the interior of the Palace as part of Wikimedia Takes the Château de Versailles in May 2011.  Among the many features they captured, highlights included the petit appartement de la Reine, the vestibule de marbre and the Galerie basse. Because the picture was taken for this special event, which was also Myrabella’s first time meeting other Wikimedians, “it is of particular value to me,” she said.

Myrabella took the photo in the afternoon of May 25, 2011, and she was especially struck by the way the sunlight reflected off the “parquet Versailles,” the wooden floors of the Hall. She believes these sunlight reflections “can be seen as an indirect evocation of Louis XIV, the Sun King.”

She is very interested in architecture, and she typically likes photographing cultural heritage monuments. Her other favorite photography subjects include flowers, and cheese, which she refers to as one of her special topics. “For sure,” she said, “I am French.”

Myrabella considers herself an amateur photographer, and she first got started more than 30 years ago doing analog black-and-white photography with a Zenit reflex camera. After getting married, she took photos less often, but in 2009, she resumed her photography, “largely thanks to Wikipedia, in fact!” She started as a contributor to French Wikipedia in 2005, but now she is mainly active on Commons. Myrabella enjoys contributing to Commons because it encourages her to “take and produce pictures for a documentary purpose,” and most of her pictures are intended for Wikipedia articles.

“I am especially proud and happy because this image has received the three Commons labels,” she said, “being a Valued Image, a Quality Image and a Featured Picture.” She is very grateful to User:Tomer_T, who nominated the image as a Featured Picture candidate.

“To me, that nomination by an user I didn’t know illustrates another aspect of Commons that I appreciate very much: Commons is a true international project, with contributors of the various parts of the world, in a generally good collaborative and friendly ambiance,” she said.