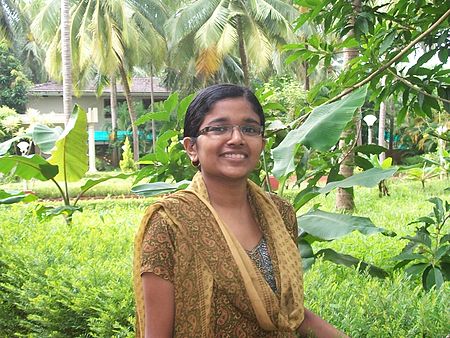 User:Netha Hussain‘s inspiring story is a wonderful way of celebrating Women’s History Month. Netha is a woman editor of the Malayalam language Wikipedia from the state of Kerala in India.

Netha is both a medical student and a Wikipedian. She mostly edits articles related to medicine/biology, literature and women’s biographies. She used to maintain a portal for biology on the Malayalam Wikipedia and is presently working to create and improve its most important health articles.

Netha recalls how she landed up on Wikipedia searching for a kind of chutney made in Malayali cuisine, ‘Chammandi‘, and after realizing there was no article on it, started it herself. Initially reluctant to edit in Malayalam, it is actually through Wikipedia that she brushed up her language skills well enough to write a Featured Article in Malayalam within a year! On the English Wikpedia, she started by editing the article about her college.

As it is so often the case, until Netha landed up at a WikiAcademy in Kozhikode, not many knew she was a female editor! She has taken up the challenge to bridge this gender gap and now runs mailing list discussions for women Wikimedians in Malayalam to share their experiences and build offline relationships. “Most of my friends online are Wikipedians”, she quips.

About welcoming women editors on Wikipedia, especially its Indic language versions, she says, “The community is very receptive to women editors. I was not privileged or discriminated just because I was a woman. I was encouraged to work on women’s biographies which were mostly stubs. With my help, many good quality articles on famous women were created on Malayalam Wikipedia.”

As in Netha’s case, in most Indic language Wikipedias it is easier to make substantial contributions than in other projects. Netha believes that the role of women is not different from the role from men in their contribution to free knowledge movements.

Netha believes her medical dreams and her Wikipedia editing reflect aligned missions “to empower people with knowledge and fulfill our duties towards the society.” (To reach out to her, the best place is her talk page.)