This article is available in: English Português

Portuguese Wikipedia is one of the top ten Wikipedia projects by number of articles, and Brazil, home of the largest number of Portuguese Wikipedia editors, is one of the key strategic areas targeted by the Global Development department. But while the influx of brand new contributors and the core community members has remained relatively stable over the years, the number of new Wikipedians who are very active on the project has experienced a troubling decline. 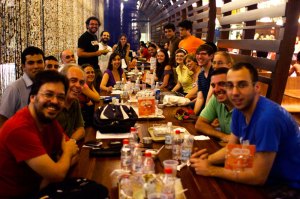 At the beginning of March, Wikimedia Foundation staff from the Community Department traveled to Brazil to learn more about the challenges to project growth and begin discussing solutions that could be undertaken by the community. They were joined by Oona Castro, the newly hired Wikimedia Foundation National Programs Director for the country.

We visited four cities: São Paulo and Rio de Janeiro, where there was already an extensive meetup culture, as well as Curitiba and Natal, where meetups had never before taken place. Over the course of two weeks, we convened dozens of editors for knowledge-sharing, discussion and debate.

The Wikipedians who participated in these meetups represent the full range of our editing community, from new contributors who have just made their first edits to veterans who have watched the community grow from the very first days of its existence. Our attendees included university students excited to use Wikipedia in the classroom, academics who recently got hooked on editing, authors of thousands of articles, cross-wiki developers and vandal-fighters, and even the world record holder for most extensive collection of cachaça bottles! Many had never attended a meetup or met other Wikipedians.

We discussed topics that matter for every Wikipedia community, including how to maintain quality while welcoming and mentoring newcomers, how to balance policy and openness and how to resolve conflicts at the individual and project levels. We also touched on the things that make Portuguese Wikipedia unique, like including editors from all lusophone countries (not just Brazil) and how to better localize technology and documentation. Our notes from all the meetups, in English and Portuguese, can be found on the Esplanada, Portuguese Wikipedia’s main community discussion space. By making these notes available to the entire community, we hope to spark more online and offline discussions of community health and improvement led by editors of Portuguese Wikipedia.

We want to thank everyone who helped us organize these gatherings, and who came to share their thoughts and ideas with us and their fellow editors! You made this the most successful series of editor meetups in Brazil history, and we hope you’ll keep this tradition going.

(For more photos, check out our gallery on Portuguese Wikipedia.)