From February 6-12, the fifth Campus Party Brasil took place, hosted in São Paulo, and we (the Wikimedia Foundation and Wikimedia Brasil) had the great opportunity to represent the Brazilian Wikimedia community through our attendance. Fifteen volunteers from the community got tickets to attend and worked alongside Kul Wadhwa, Pats Peña, and me (Jessie Wild), who came in from San Francisco. We had and accomplished a few specific goals:

In addition to the above, we were all able to make a lot of new friends! We had the privilege of sharing a table with the Mozilla community and the Garoa Hacker Club community (we also adopted one Angry Bird). This led to great connections for us all, and we are excited about the potential to work together more, as compatible communities going forward. 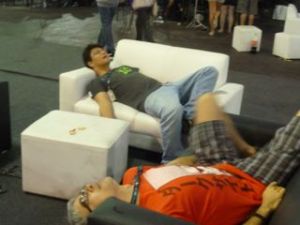 There are certainly things we can improve on. Primarily, though we had a lot of volunteers sign up for tickets, unfortunately not all came or did not participate in the outreach event. Next time, it may help us to be more explicit in the different roles each of us can have in supporting Wikipedia/Wikimedia while at the conference, so that everyone knows how they are to be involved in promoting Wikipedia.

But – all in all, another great event in São Paulo (although very exhausting)…