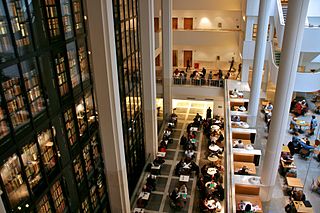 View of the King's Library at the British Library (taken during a Wikimedia editathon, January 2011)

The British Library, one of the largest libraries in the world, whose collection grows by around 10 kilometers (6 miles) of shelf space each year, is soliciting applications from experienced Wikipedians with a good understanding of Wikimedia and GLAM projects for the six-month position of a Wikimedian in Residence. The post has funding from the Arts and Humanities Research Council. The programme of activities will be run as part of an ongoing partnership with Wikimedia UK, where the institution has already hosted events such as an editathon, where its curators met with Wikipedians to improve content on Wikipedia using the library’s resources.

As the chapter’s Ashley Van Haeften told Wired UK, “the main purpose of the position is to ensure a successful programme of collaboration with British Library staff and curators supporting volunteers with a passion for sharing open knowledge about the library’s collections and projects. I have met many curators that are astonishingly passionate about openly sharing the knowledge that the library preserves.”

The concept of Wikipedian/Wikimedian in Residence was pioneered in 2010 by Liam Wyatt at the nearby British Museum. Since then, it has spread to other venerable cultural institutions around the world. Recently, Dominic McDevitt-Parks, Wikipedian in Residence at the US National Archives, proudly announced that it was releasing a newly discovered audio recording from the John F. Kennedy assassination to Wikimedia Commons.

The deadline to apply at the British Library is February 23.