In a previous blog post, we discussed our readers’ perception of article quality. In addition, we asked our readers to compare Wikipedia as a whole to other prominent websites – Facebook, Twitter, New York Times, Google, YouTube, Yahoo and CNN. Of course, there are several key differences between them, but we wanted to understand how Wikipedia stacks up against other high-traffic websites.

Readers from all 16 countries in our sample compared Wikipedia’s interface and ease of navigation to other Internet properties. If we look at the sample as whole, Wikipedia (8.09 on 10) was rated a close second to Google (8.44) on these measures. What makes this even more interesting is Wikipedia’s relationship with the search engine, which we mentioned in an earlier blog post. Although ratings varied across countries quite significantly, in most cases there was little deviation in ratings relative to other websites, with some exceptions.

When asked about the Wikipedia interface, readers scored Wikipedia 7.92 out of 10 on average, just behind Google (8.3). About 46 percent of our readers scored the interface 9+ out of 10, compared to 54 percent for Google. We did not find significant deviations across countries or languages, with one exception: Readers in Egypt (and by extension, Arabic speakers) rated Wikipedia lower than YouTube, Facebook and Yahoo. A desire for better right-to-left support is one plausible explanation for the result. 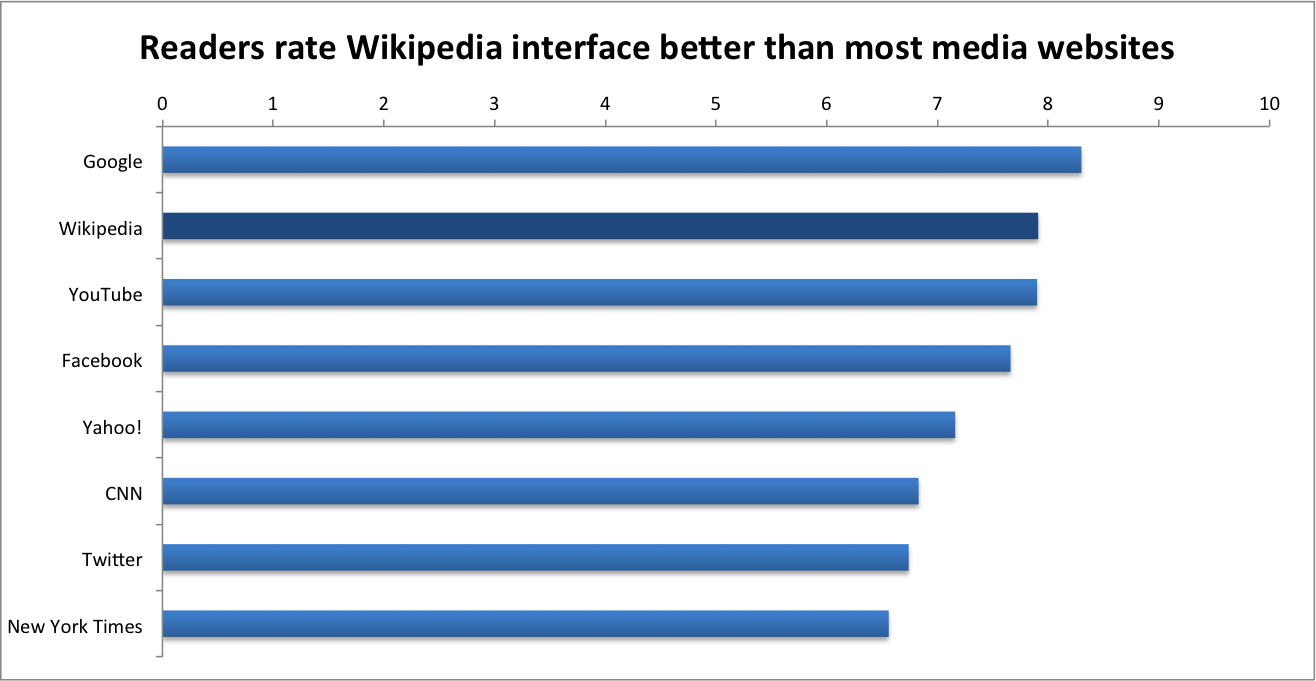 D8a. How appealing do you find the interface or look of the following sites?

Readers scored Wikipedia 8.27 on this metric, slightly lower than Google (8.59). 53 percent of our readers rated the ease of navigation 9+ out of 10, compared to 63 percent for Google. As above, Arabic/Egyptian readers rated Wikipedia below YouTube, Facebook, and Yahoo.

D8b. How easy do you find it to navigate the following sites?

We recently conducted an online survey of Wikipedia readers, limited to 250 participants each in 16 countries. This is the seventh in a series of blog posts summarizing our findings. If you are interested, you can find out more about the methodology of the survey here.