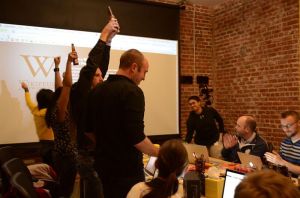 I’ve had ten hours of sleep in the last three days, and I just ate my first proper meal since Saturday. My inbox is clogged with messages I may never read. I am tired, but happy.

The Wikipedia blackout is over. Our goal was to raise awareness about SOPA and PIPA and to encourage readers to make their voices heard — and we’ve been successful on both counts. More than eight million people used our look-up tool to find their elected representatives, and millions more made their voices heard on social media. Thousands of journalists wrote news stories featuring the Wikipedia blackout screen.

We’ve made history together, all of us. And I think it’s important we understand what’s happened here, because the ground has just shifted under our feet.

Journalists see this as a conflict between old media and new media. They are wrong.

They see it that way because it fits with how things normally work.

“Right now, if you want effective legislation around your industry, then you need to pay the right lobbyists, make the right campaign contributions, and write the right legislation at the right time in order to get it out of Washington,” says Clay Johnson, formerly of the Sunlight Foundation. “If you had to objectively pick the winning team in Washington, pick the team with deep pockets and great lobbyists, not the team with community organizers and signed petitions. … It sucks, but those are the rules of the game.”

That’s precisely why MPAA chair and former longtime senator Chris Dodd called the blackout an “abuse of power,” and characterized it as “technology business interests resorting to stunts that punish their users or turn them into corporate pawns.” He can only see the issue as a clash of moneyed interests, because that’s how things normally have worked.

That’s why NPR, the Associated Press, Fox News – all label this fight as Hollywood versus Silicon Valley. It’s why stories like this one from Bloomberg compare how much money television, movie and music companies are spending in Washington, versus what Google and Facebook are spending. People are imagining that post-blackout we are playing the same game, just with new participants.

That’s not what this is.

There’s a lovely Clay Shirky talk floating around the Internet today. In it, Clay says what’s at risk with SOPA and PIPA isn’t just websites, or website owners: it’s our ability to share things with one another, as individual human beings. We are the people, Clay says, that SOPA and PIPA aim to police, because the biggest producers of content on the Internet are not Google and Yahoo. It’s us.

We know that’s true, because the people who led the blackout yesterday weren’t the CEOs of Google or Yahoo or Facebook or Twitter. It wasn’t the Wikimedia Foundation. The blackout was led by ordinary Internet users. At its centre were people like Osarius and SiPlus and FT2 and Titoxd and Fluffernutter. These are the people at the forefront of online content creation.

Wikipedia’s involvement in the fight against SOPA proves this wasn’t about powerful interest groups, and it wasn’t about money. Wikipedia is operated, and not controlled, by a non-profit — it’s got no corporate interests to protect and it doesn’t make any money from piracy or copyright infringement. It’s written by ordinary people. Reddit is a bunch of people sharing links and talking about them. Metafilter is the same. Tumblr, Craigslist, the Cheezburger network, The Oatmeal, 4chan, identi.ca. These are not mega-corporations.

The Internet has been giving ordinary people access to the means of production for more than fifteen years. Sometimes we use it to create pictures of cute cats. Sometimes it’s the world’s largest encyclopedia. Sometimes, we bring down corrupt regimes.

What happened yesterday is that around the world, Internet users found their voice — fighting back against people who wanted to threaten their freedoms. It is true that copyright infringement poses a problem, and it’s reasonable that those affected want to get their problem solved. But their problem is not more important than the ability of ordinary people to express themselves, to share and to learn.

It sounded today like Congress is starting to come back to technology firms and their users and ask what they want. What compromises to SOPA and PIPA would be acceptable. Would OPEN work. Do they need to draw up something new.

The message of the Wikipedia blackout, and the other responses to SOPA and PIPA, wasn’t “Let’s talk about how we can combat online copyright infringement.” It was: “Don’t hurt the Internet. It’s too important. Let us do our work. Let us learn and create and share.”

I want to thank everyone involved with the blackout. Below is a quick list of people I worked with, or saw working. If you helped but you’re not named here, please consider yourself thanked :-)

I am happy to add new names to this list — if you want to nominate anyone, just say so in the comments :-)