For about ten days in December, Frank Schulenburg, Moushira Elamrawy, and I met with various professors, students, and local Wikipedians in Cairo, Egypt. The initial Arabic Catalyst Project trip from October showed that there is potential in working with faculty members and students on improving the Arabic Wikipedia; this December trip made clear that there is a very high level of interest among people at universities in Cairo to do so.

The Cairo pilot project – the newest part of the Wikipedia Education Program – will begin in early 2012. Its primary goal will be to improve the quality and quantity of the Arabic Wikipedia, which is currently very small (only about 150,000 articles) even though as the fifth most common language in the world Arabic has about 400 million speakers worldwide (compare this to Japanese, which has about 130 million speakers worldwide but almost 800,000 Wikipedia articles). As part of the Cairo pilot, students from Ain Shams University and Cairo University will contribute new content to the Arabic Wikipedia or translate content from another language into Arabic on Wikipedia. The plan is to have about 4-6 classes in the pilot, and only the top 3-15 students from each of these classes will actually contribute to Wikipedia. We want to keep the pilot very small, to make sure that we’ve figured out what works and doesn’t work before we expand the project to more people and more places. 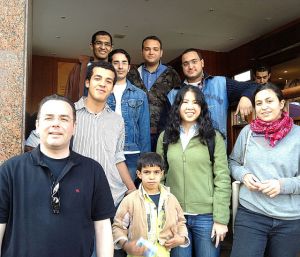 We were surprised by how many instructors in Egypt were excited about participating in the project. Everybody we talked to was convinced that growing and enhancing the Arabic Wikipedia would be a good idea – in fact, many professors and students told us they felt the responsibility to make free knowledge in Arabic better. We have identified about six professors for participation in the pilot, based on their understanding of Wikipedia, their genuine interest in enhancing the Arabic Wikipedia, and the writing skills of their students. Almost all the students we met also showed genuine interest in learning more about Wikipedia and contributing to it.

We are also very happy to have the support of local Wikipedians. Essam Sharaf – a long-term Wikipedian and a student at Cairo University – connected us with professors and students, helped us maneuver the streets and campuses of Cairo, and enhanced our understanding of Egypt’s social, cultural, and political context. Frank, Moushira, and I also met with an active group of Cairo-based Arabic Wikipedians and went on a photo-walk with them, during which we took pictures of Old Cairo and then uploaded them onto Wikimedia Commons (including the panoramic photo now on this Wikipedia article). We’ve also been communicating with other members of the Arabic Wikipedia community, whom we’ve found to be extremely helpful and inspiring. We feel very fortunate that this group of enthusiastic, smart, and motivated volunteers has expressed genuine interest in becoming Wikipedia Ambassadors (who teach students how to edit Wikipedia) and laying the foundation to make the Cairo pilot a success.