If you’ve been to Milwaukee, Wisconsin, in the last 10 years, chances are you’ve admired the Milwaukee Art Museum’s building, especially its brise soleil, whose wing-like span closes at night. But until recently, the Wikipedia article on the museum lacked a video of the brise soleil in action. 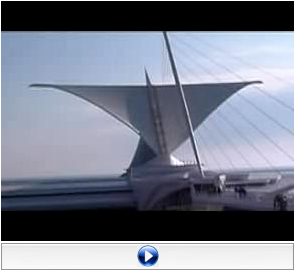 Alverno College student Katy Lederer created this video of the Milwaukee Art Museum’s brise soleil as an assignment for her class, which was participating in the Wikipedia Education Program.

Katy Lederer changed that in November. Katy is finishing up her final year of school at Alverno College, a women’s college in Milwaukee, and her professor this term joined the Wikipedia Education Program. Professor Jennifer Geigel Mikulay’s Advanced Media Studies course required students to create a video to add to a Wikipedia article. Longtime Wikipedians User:OrangeMike and User:Protonk served as Wikipedia Ambassadors for the class, offering students information about how Wikipedia works and how to add their videos to articles. Katy chose to make a video of the Milwaukee Art Museum’s brise soleil.

“Ever since the announcement about the addition to the art museum was made I have been captivated by the work. With every stage of its construction I waited anxiously for the next and could not wait to see it finished and working. I am very surprised a video didn’t exist already [on Wikipedia],” Katy says. “I don’t know if Milwaukee understands the magnificence of the brise soleil. I am truly shocked by the number of people–friends, peers, classmates, Milwaukee residents–who told me they had never seen the wings move before watching my video.”

Katy, a lifelong Milwaukee resident, has been thrilled by the reception her video has gotten since she uploaded it in mid-November. The video appeared as the Wikimedia Commons Media of the Day on November 26, leading to hundreds of people viewing her video. Katy says she really enjoyed putting the video together, and she was especially moved that her work for class would appear on a resource like Wikipedia that she uses often.

“I consider myself to be generally non-traditional so doing this assignment was a breath of fresh air. Stressful air, but fresh none the less!” she says. “I am grateful that we had this opportunity. With online resources being so prevalent in our lives today–and Wikipedia being such a valued resource–it’s important to understand how it works.”

Next up for Katy is finishing her degree in Professional Communication, but she says she hopes to create more videos for Wikipedia in the future. She and a classmate are talking about taking a river tour in Chicago of Frank Lloyd Wright homes, and Katy’s already scheming to create a narrated video for Wikipedia of the trip.

“I’m drawn to visual work, so the appeal of working with a camera always takes precedence over books,” she says.