The Wikimedia Foundation is working on new products and global initiatives to increase participation in our projects, specifically Wikipedia. To help inform the development of this work we’ve been researching the trends and patterns of Wikipedia editors, most recently through the Wikipedia Summer of Research initiative and also with data from the 2011 Wikipedia Editors Survey.

While studying editor participation trends, we have hypothesized that acrimony and disagreement in the editing community could be a leading cause of a decrease in project participation. To test this hypothesis as a segment of our analysis of responses to the Editor Survey (report here), we defined the Wikipedia Editor Satisfaction Index (WESI). The WESI is a metric gauging the overall satisfaction of the editing community and interactions/assessments of fellow editors. We used responses to two questions on the survey: how they described their fellow editors (picking from a set of adjectives), and whether they believed community feedback had helped them personally. These responses were weighted, and then normalized to a 0-10 rating.

The results were encouraging. About 47 percent of editors surveyed scored 10/10. In all, about 77 percent of those surveyed scored 7.5 or higher, indicating that the majority of our editing community is very satisfied with their experience on Wikipedia and has a healthy assessment of fellow editors. This is great news – as Wikipedia continues to focus on improving the editing experience, while also making efforts to foster new participation (especially in the Global South), the community’s support is vital. 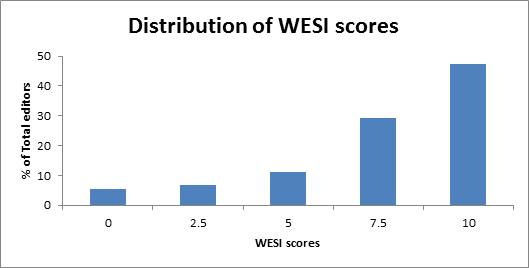 Distribution of WESI scores across all surveyed Wikipedia editors

In order to understand what factors determine an Editor’s satisfaction with Wikipedia, we performed a multilinear regression1 on the WESI metric. Some interesting findings:

A comparision of WESI scores reveals that women are, on average, less satisfied than men, though not by much – about 5 percent. Although transsexuals/transgenders (marked below as Others) together account for only 0.5 percent of our sample, it’s important to note that their satisfaction scores are significantly lower. 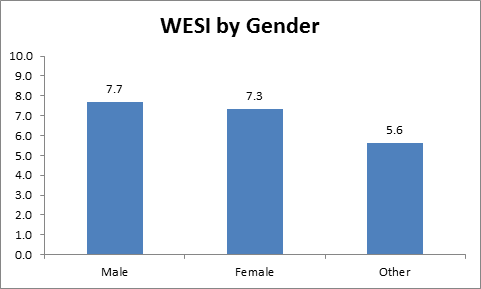 The Editor Survey Report highlights some more findings, but the emerging theme is simple: be nice to each other, and help out where you can!

As we work towards establishing the WESI metric as a standard for understanding the community’s experiences on Wikipedia, we’ll continue to share more findings (and implications) of the Wikipedia Editor Satisfaction Index.

(This is the eleventh in series of blog posts where we previously shared insights from the April 2011 Editors Survey.)