June traditionally marks the end of the academic year in the United States, which means that the first year of the pilot project to bring Wikipedia editing into university classrooms, the Public Policy Initiative, has come to an end. Over the next few months, we’ll be reflecting on the successes and the challenges of our program, but here’s an initial overview of all we’ve accomplished. 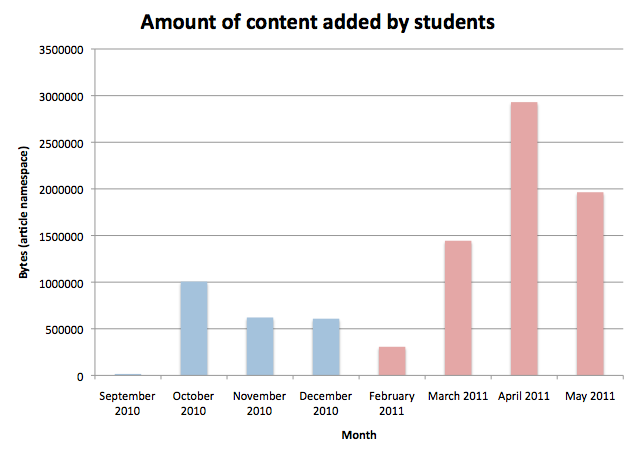 This chart shows the number of bytes students participating in the Public Policy Initiative added to the English Wikipedia’s article namespace each month.

Over the two terms of the Public Policy Initiative, more than 800 students were introduced to Wikipedia editing as part of their coursework. In the fall term, we worked with 14 classes. In the just-completed spring term, we worked with 33. The chart at right shows the number of bytes our students added to articles. All told, students contributed 8.8 million bytes to the English Wikipedia this academic year. That’s the equivalent of more than 5,800 pages of content to Wikipedia. Put another way, that’s 11 reams of paper filled with new content.

The best part is, the content students are adding is of high quality. On average, public policy articles within the project improved by 140 percent, based on a numerical weighted ranking as assessed by Wikipedia experts and public policy experts. The articles went from an average score of 6.88 before the project to a score of 16.54 after the students completed their work. Our research analyst, Amy Roth, is busy crunching numbers, so look for an expanded report to be published on the Outreach wiki this summer. 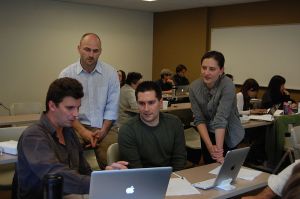 Online Ambassadors are experienced Wikipedians with a track record of good content development and newbie assistance. More than 90 Wikipedians are available to serve as wiki mentors for the students, answering questions on-wiki, through the IRC channel #wikipedia-en-classroom, and via email. Online Ambassadors have helped guide their students through the Did You Know process, which we’ve found to be a huge motivator for students, who really enjoy having their articles featured on Wikipedia’s main page. 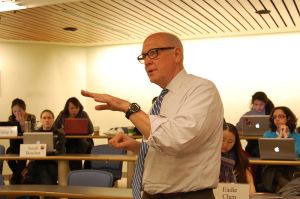 Alex Jones, a professor at Harvard, used Wikipedia in his class in the spring.

The professors we worked with often asked for a sample syllabus, hints on assignment design, and materials they could distribute to students that would help them learn. We developed a new Education Portal that serves as a clearinghouse for all the information we’ve collected that’s of use to instructors. The education portal contains reasons why Wikipedia assignments are useful for professors and students, case studies of successful courses, and support materials professors need as they plan their courses. If you’ve seen other syllabi that incorporate Wikipedia assignments, we encourage you to add them to the Education Portal.

The Public Policy Initiative was a pilot project that had two aims: (1) improve the content of U.S. public policy articles on the English Wikipedia, and (2) see if the Wikimedia Foundation could enhance the relationship between Wikipedia and academia. We’re excited to say we’ve accomplished both, and we’re eager to broaden the work we’ve already started with our new Global University Program. 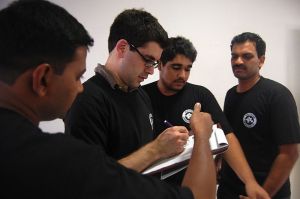 As the name global implies, we’re also eager to get the program started in other countries and on other Wikipedias as well. For the next academic year, we expect to see universities in India, the U.K., and Canada (and maybe more) using Wikipedia in the classroom with the support of Wikipedia Ambassadors. Last week, Wikimedia Foundation staff trained the first cohort of Campus Ambassadors in Pune, which will be the location of our pilot in India, and the classes these Campus Ambassadors will be supporting are starting in a few weeks.

With our global expansion, we’re looking forward to working with community members around the world to get university programs going in every country. Interested in helping? Become a Wikipedia Ambassador, or point a professor you know in the direction of the new Education Portal. Start a discussion on our talk page. Join us as we explore the next chapter of Wikipedia’s partnership with academia.