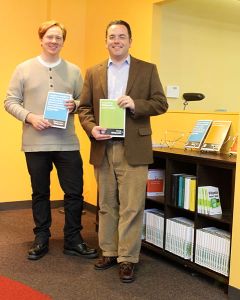 Today it is my pleasure to announce that the Wikimedia Foundation has a new fellow, Lennart Guldbrandsson. He is the fourth fellow, after Steven Walling, Victoria Doronina and Maryana Pinchuk. During his fellowship, Lennart will work on two projects: the Bookshelf Project and the Account Creation Improvement Project.

A long-time Wikipedian from Sweden, Lennart has been on our radar for some time now. He founded and became the first chair of the second largest Wikimedia chapters, Wikimedia Sverige, wrote one of the first books about Wikipedia, and has written several of the Wikipedia instructional videos. Lately, we hired him to work with the Bookshelf Project, as he has many years of experience as a writer and writing teacher. After studies at Uppsala and Gothenburg, where he now lives, he has his own writing company. He is active on several wikis under the user name Hannibal.

Lennart’s work with the Bookshelf Project will focus on getting the educational materials translated into many more languages as well as helping chapters and individuals dissemination the materials effectively on a global scale. See some examples of the Bookshelf materials here.

The other part of the fellowship is to make it easier for newcomers to create their accounts on Wikipedia – and facilitate their first steps after they have created the account. A short explanation for why that’s important is here.

The idea is that both these projects should be as engaging and transparent as possible. Lennart will post reports regularly, and try to get your feedback from time to time, and generally be reminding you of the existence of these projects.

For both of these projects, Lennart wants you to know that he will need help. You are welcome to sign up here for the Bookshelf Project or here for Account Creation. Or you can send an email to lennart@wikimedia.org.